The list of Haskell tools that can make your life better

Haskell is a pure functional general-purpose programming language with static typing and lazy evaluation. It was created in 1990 and was named after Haskell Curry. At present, the GHC compiler is its main implementation.

Here at Typeable we like this language very much and use it as our main language for software development. Though Haskell is already quite widely used in the industry, it’s still sometimes believed to be an “academical” language used exclusively for scientific purposes. In this post, I’d like to tell you about several rather popular Haskell tools which may be of use to you.

Xmonad is a tile window manager for X Window System, written in Haskell. The distinctive feature of this tile manager is that it’s configured in Haskell, too, which allows us to use all features of the language. Thus, while configuring the window manager, you can add weather forecast data, measure the system condition, etc.

Here is an example of configured system (by erikbackman):

You can find further information on the xmonad website.

ShellCheck is a utility used to analyze bash scripts. It allows novices to fish out common errors when they just start learning this scripting language and helps more advanced users not to miss small bugs in large and complex scripts. The project is being constantly expanded and its large community is adding new rules. You can view the ShellCheck and try it out at its home page.

Let’s use the following script by way of example (try to find the errors in it without looking into the ShellCheck result):

As the result, we’ll be informed about all potential errors in the script:

Haskell was used to develop several popular compiled functional languages for the frontend development which are eventually transpiled into JavaScript. Today we’re going to talk about PureScript. This language has a strict type system supporting algebraic data types, HKT (Higher-Kinded Types), and type classes with functional dependencies. It also supports several necessary and handy features such as FFI (Foreign Function Interface) with JS, and the resulting JS looks very much readable. The language has already acquired its own ecosystem: the package manager spago and IDE based on its own language server.

For further study, you can proceed to the official website.

Haskell works really well when it comes to developing programming languages! Agda is another example. This is a language with a strong theoretical background and dependent types whose syntax looks much like that of Haskell. Moreover, this is also an automated theorem proving system: logical assertions are expressed as types, and successful type checking is the proof of program correctness.

What’s this all for? First of all, this allows avoiding a vast number of run-time errors and to some extent prevents the programmer from writing incorrect code, as utopian as it may sound. Let’s consider a classic example: we’d like to rewrite the head function that takes the list head but we want to make sure that we don’t pass an empty list to this function anywhere in our program.

PostgREST is an independent web server that will turn your database schema directly into RESTful API. This approach saves you the trouble of writing the boilerplate for CRUD and allows you to focus on the important details of business logic. The advantages include the use of PostgreSQL binary protocol and serialization of JSON directly to SQL to improve performance.

Let’s take a simple city and country scheme as an example:

As the result, we get the following API for this scheme: 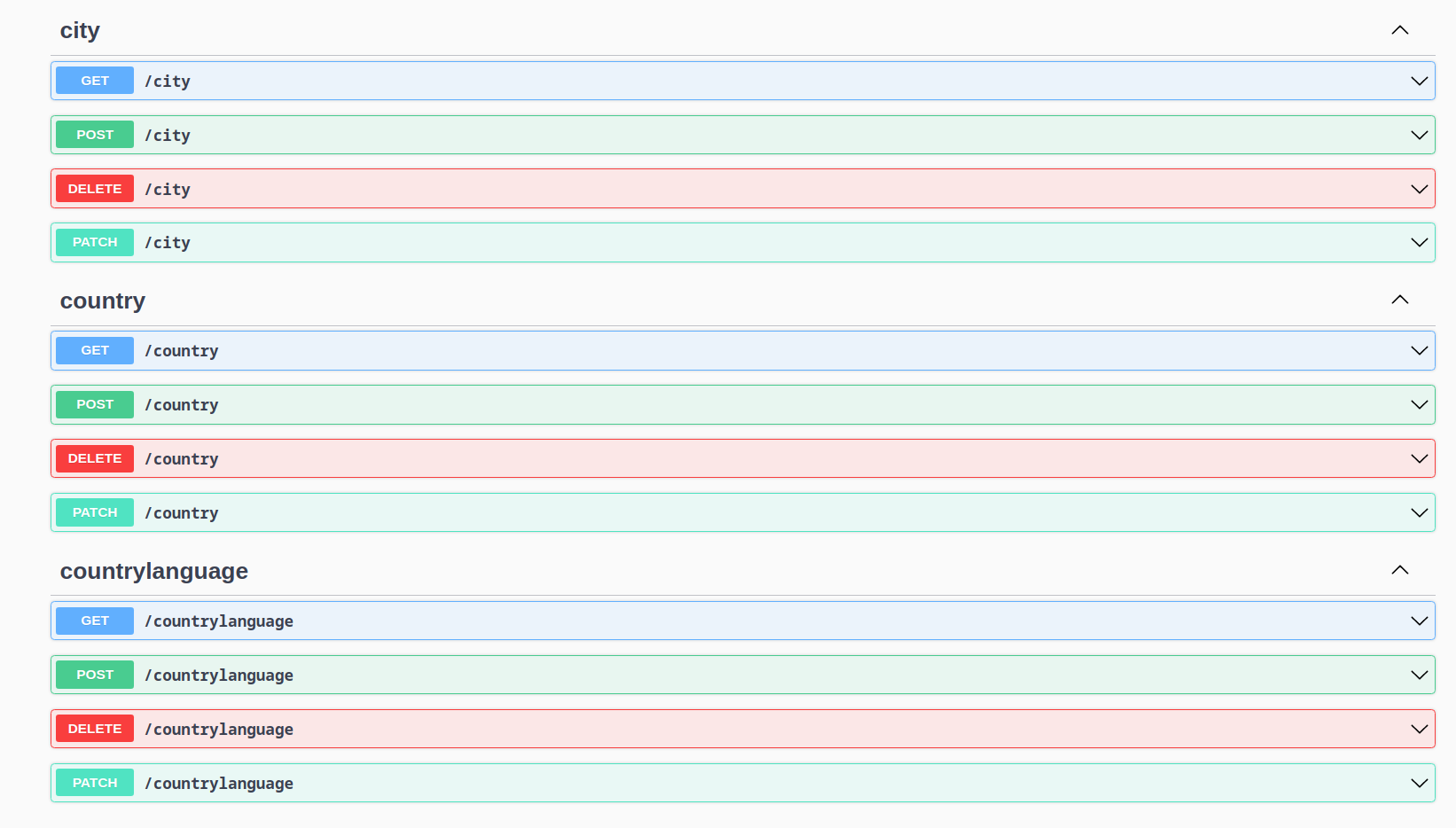 Octopod is a service we developed in Typeable that allows our team to use the entire Helm’s potential without the need for technical knowledge. Our solution makes it easier to manage dynamic environments for the whole team: DevOps, developers, testers, and project managers. All you need is to indicate the URL to the Helm repository and Octopod will automatically get the required configurations.

We wrote about this service earlier, and you can find more information on Octopod home page.

You can download the tool and view all supported formats here.

I didn’t list all supported conversion options as it would’ve taken all the post. Just look at the graph showing what and how can be converted: a big picture!

Here I’ve listed the open-source projects which I believe to be the most interesting and useful for a wide circle of users. This list can be used as an answer to the question “Is there anything useful written in Haskell beyond the science?”

Surely, the list is not exhaustive and can be extended. If you think that it should include a certain project or just want to share a cool Haskell tool – let us know.

How We Choose Programming Languages at Typeable We’ve written this post to demystify what is going on in our heads when we think about the technology selection. Read more Do You Know Where Lisp Is Used Nowadays? Lisp is the second-oldest high-level programming language in use, the first functional one. How common are the Lisp dialects nowadays and where are they applied? Read more Advantages of Functional Programming Here in Typeable, we use Haskell as the main development language and we would like to share our opinion which is based on this experience. Read more Do You Know Where Haskell Is Used? Haskell is a general-purpose purely functional programming language. Today we’re going to give some examples of its practical use in various industries. Read more
Want to know more?
Get in touch with us!
Contact Us

Typeable OU ("us", "we", or "our") operates https://typeable.io (the "Site"). This page informs you of our policies regarding the collection, use and disclosure of Personal Information we receive from users of the Site.

We use your Personal Information only for providing and improving the Site. By using the Site, you agree to the collection and use of information in accordance with this policy.

Information Collection And Use

Like many site operators, we collect information that your browser sends whenever you visit our Site ("Log Data").

This Log Data may include information such as your computer's Internet Protocol ("IP") address, browser type, browser version, the pages of our Site that you visit, the time and date of your visit, the time spent on those pages and other statistics.

In addition, we may use third party services such as Google Analytics that collect, monitor and analyze this ...

Cookies are files with small amount of data, which may include an anonymous unique identifier. Cookies are sent to your browser from a web site and stored on your computer's hard drive.

Like many sites, we use "cookies" to collect information. You can instruct your browser to refuse all cookies or to indicate when a cookie is being sent. However, if you do not accept cookies, you may not be able to use some portions of our Site.

The security of your Personal Information is important to us, so we don't store any personal information and use third-party GDPR-compliant services to store contact data supplied with a "Contact Us" form and job applications data, suplied via "Careers" page.

This Privacy Policy is effective as of @@privacePolicyDate​ and will remain in effect except with respect to any changes in its provisions in the future, which will be in effect immediately after being posted on this page.

If we make any material changes to this Privacy Policy, we will notify you either through the email address you have provided us, or by placing a prominent notice on our website.