Parallel Universes for Your CI/CD With Octopod

Story of improving the processes and open-sourcing Octopod

Hi everyone! I’m going to tell you how we came up with an idea of a technical solution to optimize the development and QA processes here in Typeable. It all started with a general feeling that we seem to be doing everything quite right, but it can be faster and more efficient when it comes to accepting new tasks, testing, or synchronizing less. All this led us to discussions and experiments which resulted in our open-source solution, which I will describe below and which is now available to you too.

Let’s not rush forward, however, and start from the very beginning to understand thoroughly what I am talking about. Imagine a fairly standard situation: a project with a three-level architecture (database, backend, frontend). There is a development process and a quality control process that would probably consist of several deployment environments:

Each of these points can be solved on its own one way or another, but the whole thing made me wonder: can we make our lives a bit easier if we move away from the “single staging” concept to a dynamic number of stagings? Just like we have CI checks for each branch in git, we could also get QA check stands for every branch separately. The only thing that stops us is the lack of infrastructure and tools. Roughly speaking what we want is for a separate staging environment with a dedicated URL to be spun up for every feature and for a QA engineer to test the feature on the staging before it is merged (or returned for a fix). Something like this: 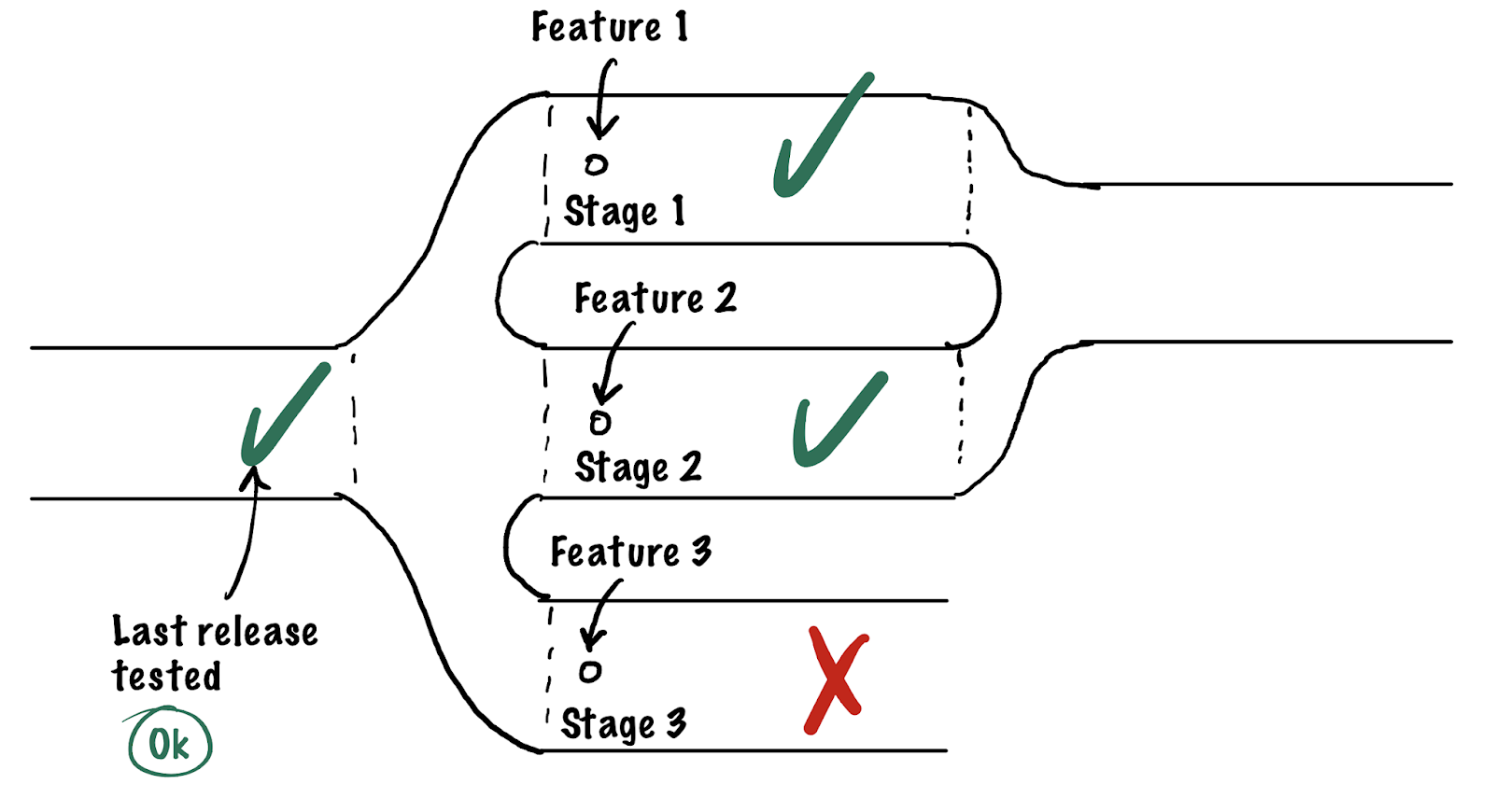 The issues of different environments are worked out naturally with this approach: 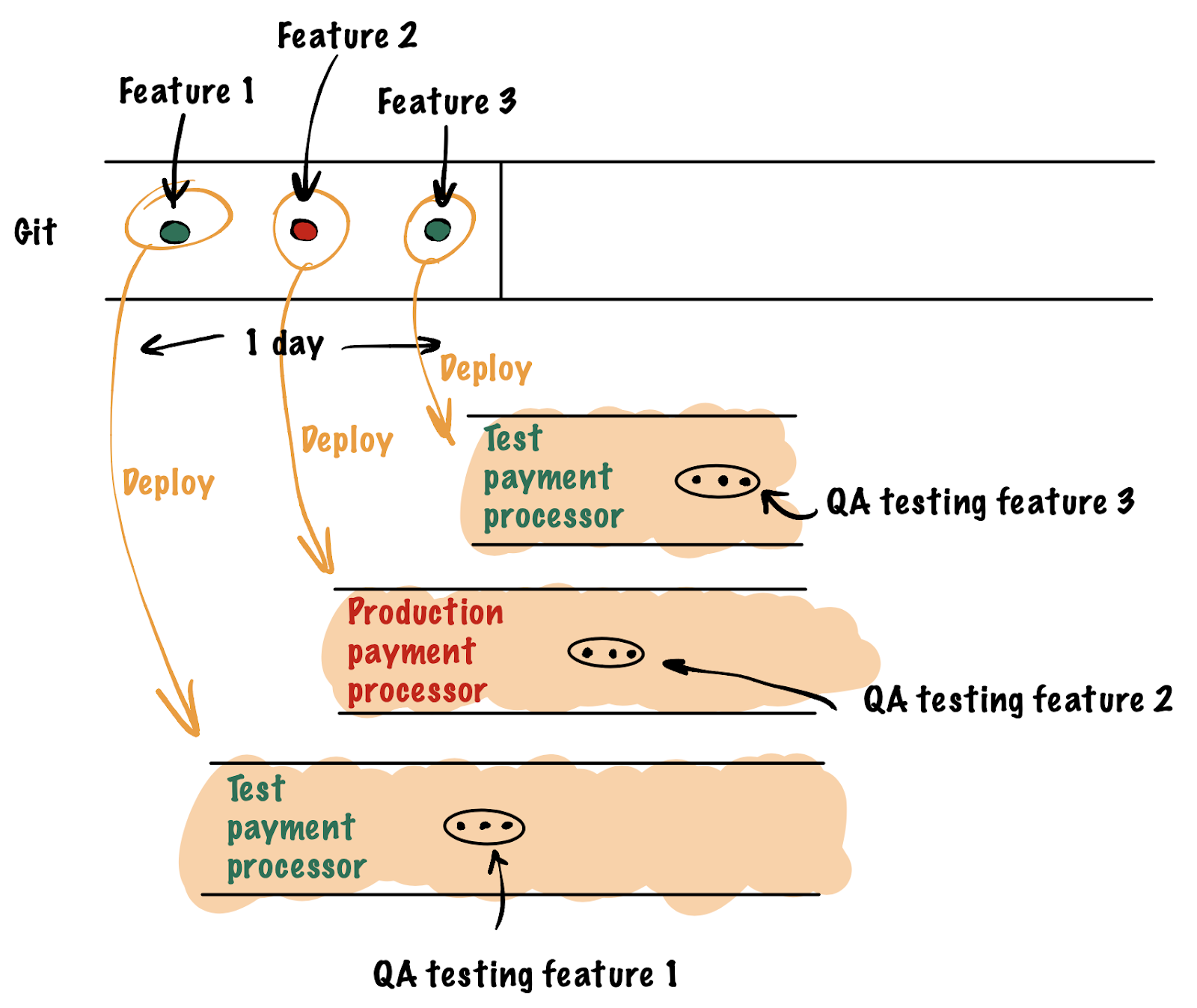 Interesting to note that following the discussion, the opinions in our team were divided between “Let’s try it, it can be improved” and “It seems OK now, I don’t see any huge issues here”, but we will return to that later.

Figuring out the solution

The first thing we tried was a prototype built by our DevOps engineer: a combination of docker-compose (orchestration), rundeck (management), and portainer (introspection), which allowed us to test the overall approach. The prototype had some ergonomics issues:

Even with all its disadvantages and some usage inconveniences, we liked the approach itself, and it started saving the time and effort of the project team. Our hypothesis was proven right and it was time to do the same thing in a more cohesive way. With the goal of optimizing the development process, we revised our requirements and realized what we wanted:

So we started developing Octopod. The name was a mix of several ideas about K8S, which we used to orchestrate everything in our projects. Many projects in this ecosystem reflect marine imagery, and we imagined a kind of octopus with tentacles orchestrating multiple underwater containers. In addition, Pod is one of the fundamental objects in Kubernetes.

In terms of technical stack, Octopod is based on Haskell, Rust, FRP, compilation to JS, and Nix. But it’s not the part of the story today, so I won’t dwell on this further.

Within the company, we started calling the new model multi-staging. Operating multiple staging environments at the same time is akin to traveling through parallel universes and dimensions in science(or not-so-much-science)-fiction, where the universes are similar to each other, except for one small detail: somewhere different sides have won the war, somewhere there’s been a cultural revolution or a tech breakthrough. The premise may be small, but may lead to dramatic changes! In our processes, this premise was the content of each individual feature branch. 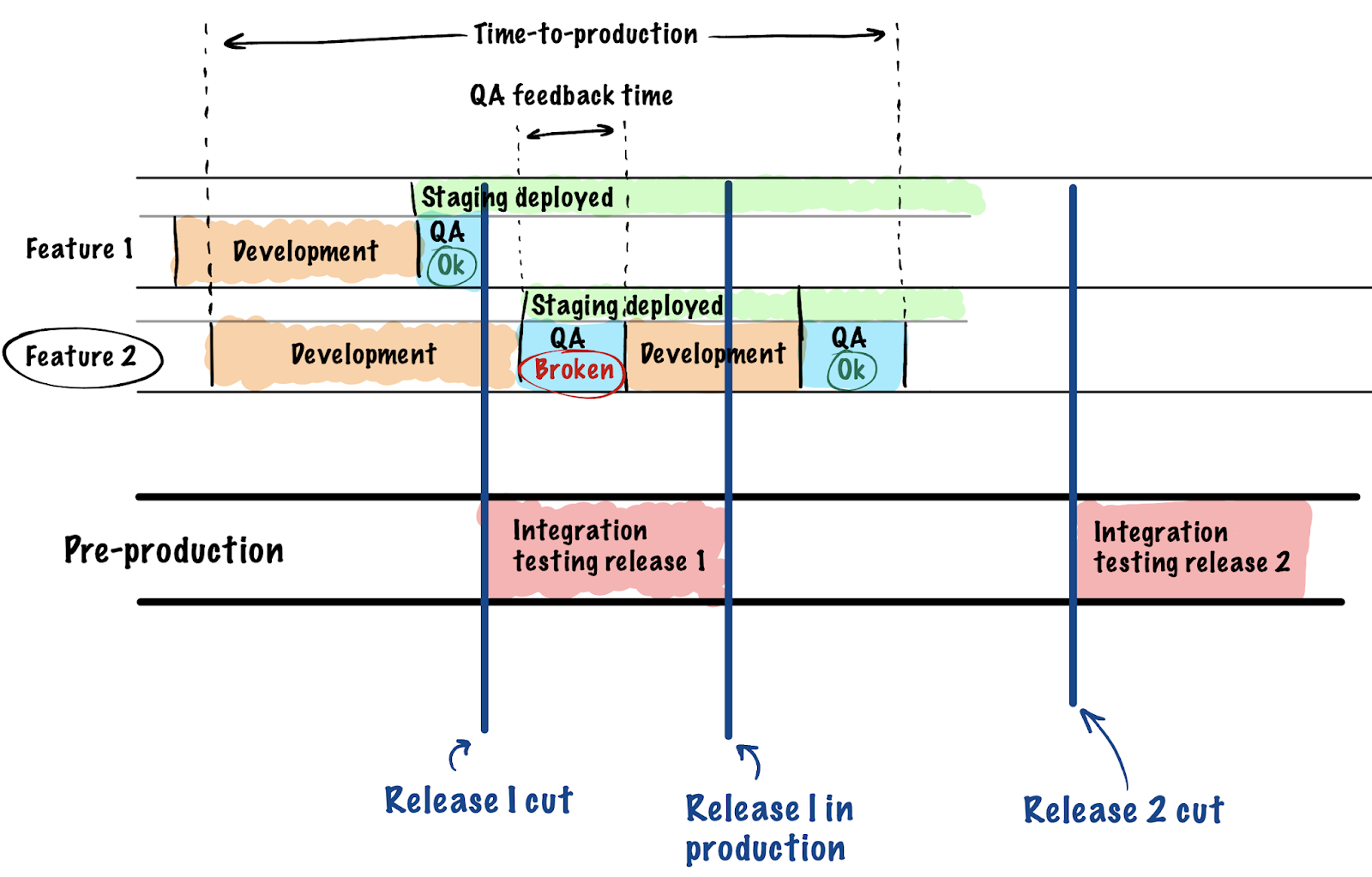 We introduced Octopod in several stages and started with a single project. This process included the adjustment of the project orchestration by DevOps, as well as the reorganization of the testing and communication process by the project manager.

After a number of iterations, some Octopod features were removed or changed beyond recognition. The first version had a page with a deployment log for each environment, but not every team accepted the fact that credentials can flow through these logs to all employees involved in development. As a result, we decided to get rid of this functionality, and then re-implemented it in a different form. Now it is customizable (and hence optional) and implemented through integration with kubernetes dashboard.

Among other things, the new approach requires more computing resources, disks and domain names to support the infrastructure, which raises the question of cost optimization. Combined with DevOps nuances, this will make for another post or even two, so I won’t go on about it here.

In parallel with solving tasks that arise on one project, we began to integrate this solution into another one when we saw interest from its team. This proved that our solution turned out to be quite customizable and flexible for the needs of different projects. At the moment, Octopod has already been widely used in our company for four months.

As a result, this system and processes have been implemented in several projects, and there is interest from one more. Interestingly, even those team members who did not see any problems with the old way of doing things, would not want to switch back to it now. It turned out that for some we solved issues that they didn’t even know about!

The most difficult part, as usual, was the first implementation — we caught most of the technical issues and problems there. Feedback from the users allowed us to better understand what needs to be improved in the first place. In the latest versions, the interface of working in Octopod looks something like this:

For us, Octopod has become the answer to a procedural question, and I would call the current state an undoubted success: the workflow has clearly become more flexible and convenient. There are still issues not fully resolved: we are dragging the authorization of Octopod itself in the cluster to Atlassian OAuth for several projects, and this process is taking longer than we expected because of bureaucratic and organizational issues. However, it is only a matter of time, as technically the problem has already been solved in the first approximation.

We hope that Octopod will be useful not only to us. We look forward to suggestions, pull requests, and information on how you optimize similar processes. If the project proves interesting to the audience, we’ll write about its orchestration and operation details in our company.

The source code with configuration examples and documentation is available in the GitHub repository.

When it Pays to Choose Microservices Is it worthwhile switching our solutions to microservices or not? Research of potential pros and cons of switching your solutions to microservices. Read more Advantages of Functional Programming Here in Typeable, we use Haskell as the main development language and we would like to share our opinion which is based on this experience. Read more The Confusion Around Your API How to prevent your APIs from scattering. In this post, we’d like to tell you what OpenAPI is and why you may need it. Read more JSON Parser Optimization, the Slow Path Trick The default choice for dealing with JSON in Haskell is the aeson package. It is relatively well optimised, yet there is always room for improvement. Read more
Want to know more?
Get in touch with us!
Contact Us

Typeable OU ("us", "we", or "our") operates https://typeable.io (the "Site"). This page informs you of our policies regarding the collection, use and disclosure of Personal Information we receive from users of the Site.

We use your Personal Information only for providing and improving the Site. By using the Site, you agree to the collection and use of information in accordance with this policy.

Information Collection And Use

Like many site operators, we collect information that your browser sends whenever you visit our Site ("Log Data").

This Log Data may include information such as your computer's Internet Protocol ("IP") address, browser type, browser version, the pages of our Site that you visit, the time and date of your visit, the time spent on those pages and other statistics.

In addition, we may use third party services such as Google Analytics that collect, monitor and analyze this ...

Cookies are files with small amount of data, which may include an anonymous unique identifier. Cookies are sent to your browser from a web site and stored on your computer's hard drive.

Like many sites, we use "cookies" to collect information. You can instruct your browser to refuse all cookies or to indicate when a cookie is being sent. However, if you do not accept cookies, you may not be able to use some portions of our Site.

The security of your Personal Information is important to us, so we don't store any personal information and use third-party GDPR-compliant services to store contact data supplied with a "Contact Us" form and job applications data, suplied via "Careers" page.

This Privacy Policy is effective as of @@privacePolicyDate​ and will remain in effect except with respect to any changes in its provisions in the future, which will be in effect immediately after being posted on this page.

If we make any material changes to this Privacy Policy, we will notify you either through the email address you have provided us, or by placing a prominent notice on our website.